Scott Costa, the publisher of tED Magazine, wants to get your attention. And, he’s chosen an increasingly popular and convenient channel to do so. He’s recently released the podcast, DistributED with tED Magazine. 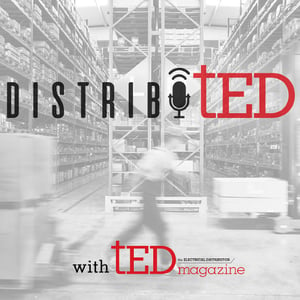 “I think it’s time to join the podcasts in a different way for a massive supply chain of 180,000-190,000 people who work for companies that are NAED members,” he said. “To reach out to them in a completely different way and share thoughts. Open their eyes a bit.”

Episodes will be between 15-25 minutes long. While the podcast will examine issues in the electrical distribution supply chain such as business best practices, the future of the industry, and diversity, Scott’s planning a twist on the content.

“We’re going outside of the supply chain to find the best, smartest people in the country—in the world—to get different perspectives on things,” he said.

Although Scott and the tED team publish tED Magazine, websites, and an e-newsletter, he still didn’t feel he was able to reach as much of the industry audience as he felt was possible.

He’s right. According to Statista, podcasting has grown as a traditional media, with 61.2% spending more time listening to podcasts than they do consuming TV shows. According to The Podcast Consumer 2019 report from The Survey by Edison Research and Triton Digital, the most top places people listen to podcasts are at home, in the car, while walking/working out, at work, or riding public transportation.

The term “podcast” is a combination of the words, “pod” derived from Apple’s portable media player, the iPod and “broadcast.” According to Statista, in 2006, only 22 percent of the adult population in the US were aware of the term. In 2019, this figure rose to 70%. There are now an estimated 86 million podcast listeners in the US.

DistributED past guests have been: Palmer Schoening, Chairman of the Family Business Coalition; Dirk Beveridge, founder of UnleashWD; Don Leavens, Vice President and Chief Economist for NEMA; and Kelly Jones, Director of Learning and Program Content for NAED. Scott has plans for more guests to participate, and he wants to hear from you too.

Check out the running list of DistributED and Get a Grip on Lighting podcast episodes. Subscribe to stay updated. It can be found by searching “DistributED with tED Magazine” on all platforms, including Spotify, Google Podcasts, and Apple Podcasts.